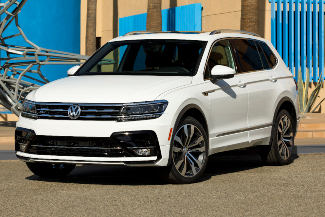 Volkswagen unveiled the second-generation Tiguan at the 2015 International Motor Show in Frankfurt, Germany. The production of the new Tiguan uses the MQB platform which Volkswagen now employs to underpin everything from superminis to mid-size SUVs.

Owing to the new platform, the Tiguan has a longer wheelbase—it is nearly a foot longer than the previous-generation Tiguan—with extra-long rear doors and more rear-seat room. Third-row seats, which are standard for front-wheel-drive models but optional for all-wheel-drive models, push the seating capacity to seven. There is also more cargo space at the back; the two-row model can now accommodate 73.5 cubic feet (versus the 56.1 cubic feet of the old Tiguan) when second-row seats are folded.

Despite being bigger, the Tiguan has retained the conventional two-box SUV look of the previous generation. Other than taking on the corporate horizontal grille and the lower front fascia of the VW Atlas, there aren’t many changes to its exterior.

What buyers get in the interior depends on which of the four trims they choose. The base S version comes with standard cloth upholstery, a 6.5-inch touchscreen multimedia system, and 17-inch alloy wheels.

The second-generation Tiguan carries over the 2.0-liter turbocharged engine of the previous generation. The updated engine has a rating of 184 horsepower and 221 foot-pounds of torque. Volkswagen also upgraded all models to an eight-speed automatic transmission. Front-wheel drive is standard, but all-wheel drive is available across the line at additional cost.

Fuel economy is slightly better than that of the previous generation; the standard front-wheel-drive versions can do 22 miles per gallon in city driving and 27 miles on the highway. Some new safety features, such as pedestrian monitoring and automatic emergency braking, are standard in all but the base S trim. 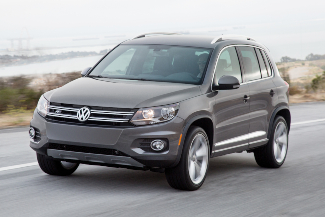 Volkswagen introduced the first Tiguan at the 2007 International Motor Show in Frankfurt, Germany. Production started later in the year at the company’s subsidiary in Wolfsburg.

The German automaker chose the word “Tiguan,” a combination of the word “tiger” and “iguana,” to evoke a sense of strength and tenacity.

Indeed, the first Tiguan had a sporty stance that did not feel as heavy or as awkward as that of the first-generation VW Touaregs. However, it retained the conventional Volkswagen look, part of which was the characteristic grinning chrome grille and the somewhat stubby rear.

Although Volkswagen initially marketed the Tiguan as an SUV, its unibody construction made it more of a crossover with limited off-roading potential than a conventional SUV. The first-generation Tiguan used the mid-size B6 platform of the Volkswagen Passat which only allowed for two-row seating. The front spotted standard bucket seats, and the back had split-bench seats which accommodated three passengers. Rear seating was tight for adults, but passengers could slide the seats back to get more legroom.

Behind the seats, the Tiguan could accommodate 23.8 cubic feet of cargo space. Cargo capacity expanded to 56.1 cubic feet when the rear seats were folded. The front passenger seat could also fold down to accommodate long cargo.

When the compact five-seater launched, it was set to compete against the likes of the Honda CR-V and Toyota RAV4.

For the US market, Volkswagen offered the first-generation Tiguan in three trim levels: S, SE and SEL. It added the R-Line trim for the 2015 model year and the Wolfsburg and Sport trims for the 2017 model year. Standard features in the mid-level SE trim included heated front seats, automatic climate control, a stereo system with a six-disc changer, and roof rails. Heated front seats became standard across the line for 2016 and subsequent model years.

All models were powered by a 2.0-liter, four-cylinder engine rated at 200 horsepower and 207 foot-pounds of torque. Volkswagen paired the turbo engines with a standard six-speed automatic transmission. Buyers interested in the base model could also opt for a six-speed manual transmission, but Volkswagen discontinued it for 2015 and subsequent model years.

First-generation Tiguans had decent acceleration for their powertrain, going from zero to 60 miles per hour in 7.9 seconds. The fuel economy was also average. The automatic transmission models could return 18 miles per gallon in city driving and 24 miles per gallon on the highway in either front-wheel or all-wheel drive.

Some of the safety features that were standard in all trim levels included six airbags, a tire pressure monitoring system, and anti-lock brakes. Electronic stability control, which detected and reduced skidding to improve the Tiguan’s stability, was also a standard feature. A backup camera became a standard feature for 2015 and subsequent model years.